“The Suicide Squad” is another band of unlikely heroes that defy the odds to triumph against a galactic foe. The term “Guardians of the Realm” wouldn’t be wholly out of place. Even Gunn’s mentor Lloyd Kaufman makes a cameo appearance in the film, lending it an air of slapstick comedy and overt brutality that he developed while working with Troma Entertainment in the 1990s. There’s no one else who could’ve written anything so delightfully nasty, cruel, and unrepentant as this, and the DC Universe is better for it. 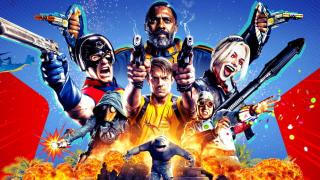 To be clear, this is a hybrid picture that has confident performers from the previous films and new ones, but it also stands on its own. You don’t have to (and shouldn’t) have watched the Ayer enjoy this one, but it’s also not a complete reset.

Viola Davis, who played Amanda Waller, the leader of Task Force X in the last film, is returning actors. She’s in command of the Suicide Squad, a group of super-powered criminals equipped with microchips implanted in their brains and ordered into combat. Go boom if you deviate from your mission plan. Go boom instead of following instructions. Go boom if you say anything wrong about Waller.

Another gathering of people is arriving on the opposite shore simultaneously as this one, enabling team one to serve as the diversion. From here on out, things truly get interesting. The crew is sent to demolish a Nazi-era jail in the island’s interior, where it turns out an extraterrestrial monster called Starro is being held captive. Lots of mayhem occurs as a result of this.

However, Gunn’s most significant achievement here is controlling this sort of sensory assault and not getting lost in the cacophony, which is more complicated than it seems. He doesn’t let the characters get lost in the chaos of the action, which is a common problem in today’s shoddy blockbusters. A rollercoaster without brakes, “The Suicide Squad” is really a very well-calibrated action-comedy, mixing hilarious rhythms with spurts of extreme violence. Also, this is the most brutal superhero movie to date, making “Deadpool” seem almost tame. As for Gunn’s brutality, it doesn’t stop there; he embraces the R rating that Marvel would never grant him, which means that his characters may have limbs torn from them, and their deaths will almost always be announced with an unappealing, squeaky sound. Most contemporary blockbusters can’t be as fun as this movie is in terms of action. If Gunn and his crew are having a good time, it will rub off on you. Audiences can tell when a filmmaker is making a picture for a business rather than for themselves. When that doesn’t happen, a film has a lasting impact, and Gunn makes this picture with a passionate, Troma-raised heart.

He’s also a great director at balancing a serious tone with his actors’ comic abilities. Both charm and fun were there in the first two “Guardians” movies, and both are present in spades here. By this time, Robbie knows Quinn likes the back of his hand, and Gunn seems to take her back to her roots more than Ayer did (even in terms of color scheme). It’s about time Idris Elba had a chance to shine in an action movie role, and he does just that. Now the rumors about how good he’d be as James Bond can resume. He’s charming and shows some nuance in his character’s internal struggle about being compelled to become a hero. They’re the stars, but everyone here contributes and brings a sense of fun to the proceedings, demonstrating Gunn’s mastery with big ensembles.

Like many contemporary superhero films, “The Suicide Squad” becomes tedious and repetitive after a while, and it’s a shame that a picture created from a provocative pattern ends with heroes and villains smashing into collapsing structures once again. Without giving anything away, the closing moments of “The Suicide Squad” have a great playfulness to them, but the pattern of “huge boom, building fall down” becomes too familiar in the end. Even while the picture is very well-made, its last third suffers from a distinct lack of ambition. Just when the film is about to devolve into tedium, Gunn regains control and focuses on what has always piqued his interest: the underdog. If you ask James Gunn, anyone—the Toxic Avenger, Rocket Raccoon, or The Polka-Dot Man—could be a hero if given the opportunity.