Snake Eyes has to revenge on his dad (Steven Allerick), who, on behalf of Cobra, was murdered by a murderer (Samuel Finzi), a flamboyant terrorist cabal. Snake Eyes was going to do everything to find the murderer of his father and would even betray Arashikage (Andrew Koji), his friend Tommy, who was the primary heir to the clan of the Ninja covert Arashikage. However, to win Tommy’s confidence, Snake Eyes must convince the Tommy family by passing a series of ninja trials involving enormous snakes and a mystical rock. “Snake Eyes: G.I. Joe Origins” is strange

Snake Eyes typically go a little farther, since like with other characters of G.I. Joe, there is nothing to the nature outside some brilliant, child-friendly overarching ideas, like devotion and honesty. 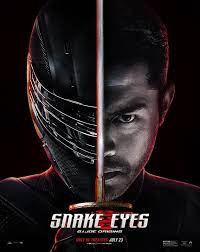 So Snake Eyes’ major character test would he sell out Tommy—in return for information on the murderer of his father, Kenta (Takehiro Kira), a disgraces member of the Arashikage clan? The answer will not surprise you at all, but that is practically next to the point. The fundamental issue with “Snake Eyes: G.I. Joe Origins” is that it answers a topic that no one asked, and with language and action movies that are drastically overproduced. It’s too politically polished to be a war crime, yet too dull to be a good summer film.

Everyone has a belabored or sarcastic response to each other’s queries, such as, who’s Cobra? How’s G.I. Joe? Why do you want Tommy to become a buddy so severely? There is not much chemistry between the film protagonists, partially because they do not appear to spread the screen for more than a second or two at a time.

Also, the action sequences are reduced not only by hand-held photography that causes headache — don’t bother to watch it in IMAX, but are also cribbed concepts from better action movies such as “The Villainess” and “The Matrix Reloaded.” It isn’t new or inherently wrong to pander to younger audiences, but “Snake Eyes: G.I. Joe Origins” takes much too much time and requires so much power simply for a bunch of hacky clichés that don’t really hold together.

I mean, it’s a film that begins with Snake Eyes putting an Uzi into the intestines of a massive fish. A sightless ninja nicknamed “Blind Master” (Peter Mensah) later reveals a camouflage fabric that enables him to merge in a stone wall. There is a barely consistent sparring session between the two sequences, when Golding plays against the Indonesian martial artist Iko Uwais (“The Raid: Redemption,” “Headshot”), who portrays a haggard ninja called “Hard Master.” In “Snake Eyes: G.I. Joe Origines,” there are many more gonzo concepts and scenarios that could have been amusing, but few of them are really entertaining.

It’s not exactly new to pander for youngsters, particularly for large budget films to over-sell the significance of action figures. But what if the most significant thing you can say about what you see in any particular scenario is, “Well, they’re trying!” Motions are also not usually the worst filming sin, but it is in a large budget that is spectacularly inspired and blocked only ever. Discuss the ritualized significance of family and honor all you want, but if nothing is on display that is eye-catching enough to justify all that self-serious conversation? That may be very dangerous.